Most AR equipment today is marketed towards enterprises. There are several reasons for this, including privacy concerns, usability and the early state of the hardware. Still, there are companies developing smart glasses for consumer purpose and targeting an upcoming market. Examples of such companies are Nreal, Spectacles by Snapchat and previously mentioned Focals. All these glasses are to be coupled with your smartphone and become an extension of your phone rather than a tool replacing it, which is the common vision for the future.

When dreaming of the future most technological developments have their ground in sci-fi, which has long been the basis of how we look at consumer AR. Although there is a long way left to go, several visionaries are showing their view of the future.

One example is Atheer, who in their video showcase the use of smart glasses on a regular day for a family of four. They see use cases such as personalized information, guidance, and hands-on interaction through smart glasses as daily activities in the future. 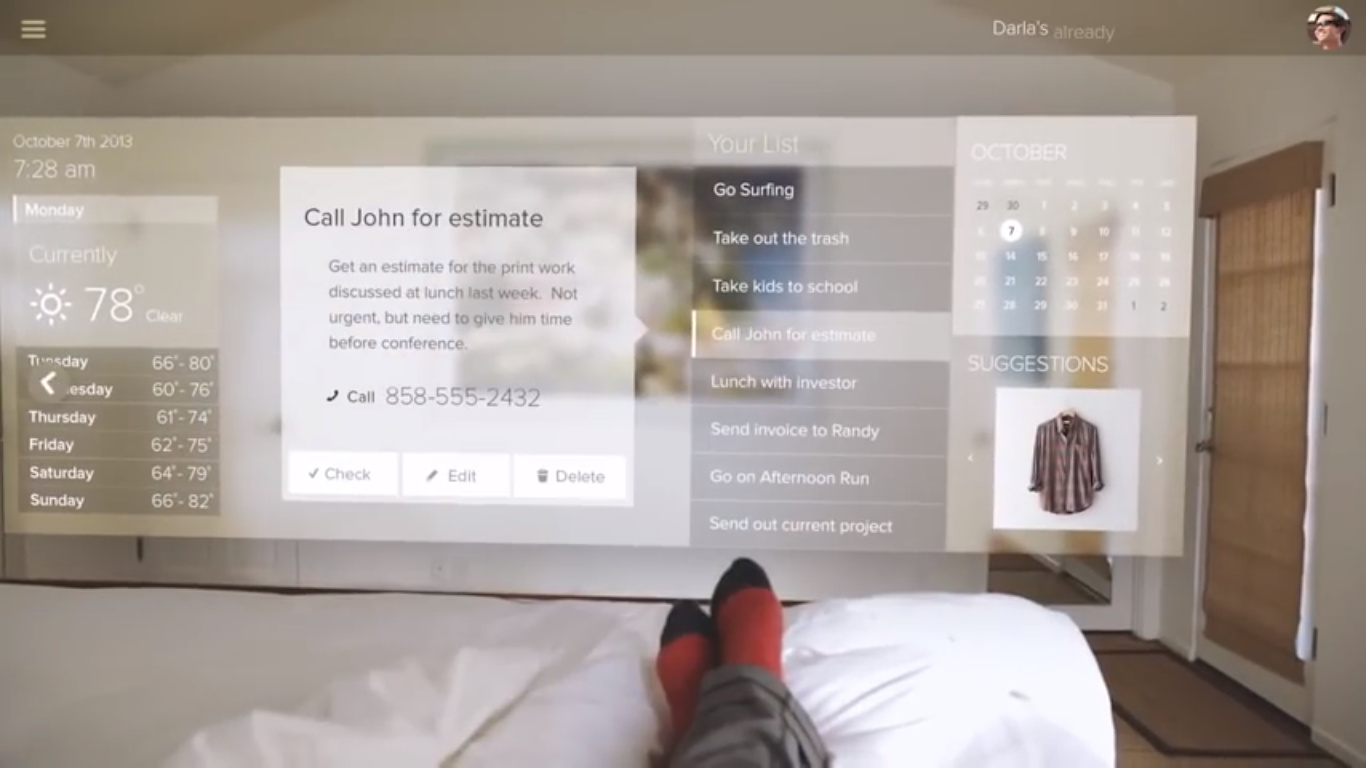 This, and videos alike are what most smart glass and AR companies are working towards, but does it match what the consumers want? What will it take for consumers to actually want to buy and start using smart glasses in their day to day activities? We have looked at some research on the area.

Several studies have looked at what aspects are valued by consumers when it comes to buying and using smart glasses, we will make a summation of some of them below.

Among perceived benefits, they rated perceived usefulness, perceived enjoyment, and social image while the perceived risk was classified as a combination of performance and financial risk. Let’s use these areas to explore what users are looking for in smart glass technology.

In the study by Yang, Yu, Zo, and Choi (2016) usefulness was partly made up by functionality and compatibility and defined as “the degree to which a person believes that using wearable devices would enhance job performance”. Functionality includes both hardware and software functionality of the new technology while compatibility measures how well it is compatible with existing hardware and software. Both these factors have a strong influence on the perceived value of the wearable device.

Apart from having specific hardware and software characteristics, consumers using smart glasses are greatly influenced by several psychological factors, driving their intentions. Among these is the search for a high level of enjoyment and a high level of self-efficacy (Basoglu, Ok & Daim, 2017).

Enjoyment is defined as “the extent to which using wearable devices is perceived as enjoyable in its own right, apart from any performance consequence that may be anticipated” and is highly influenced by the visual attractiveness of the wearable device. Although, interestingly, enjoyment is more important for customers who already use wearables, while the potential users value usefulness higher (Yang, Yu, Zo & Choi, 2016). Smart glass developers such as Nreal and the Spectacles by Snapchat value customer enjoyment a lot when creating their technology.

Social image, partly made up by visual attractiveness and brand name and defined as “the extent to which users may derive respect and admiration from peers in their social communities through wearable device usage” (Yang, Yu, Zo & Choi, 2016), is a strong factor influencing consumers perceived value of wearables.

Consumers are primarily influenced by friends, family, news, and advertisements in their opinion towards the usage of smart glasses (Basoglu, Ok & Daim, 2017) and this relationship is especially strong for extrovert personalities, due to their strive to assimilate with their peers (Rauschnabel, Brem, & Ivens, 2015). This is a factor where Focals by North and Snapchat invest much of their energy.

In general, consumers do find the usage of smart glasses to be a bit risky and do have some concerns regarding how they will affect their health (Basoglu, Ok & Daim, 2017). Interestingly, in the study by Yang, Yu, Zo, and Choi (2016) perceived risk affected perceived value only for potential users.

Looking at the results from the above studies, smart glass software and hardware developers are facing several challenges in the future if smart glasses are to be adopted by the consumer market. Not only in creating technology with great hardware and software at a low cost but also when it comes to providing enjoyment and making a social statement impacting the user’s social image. They also face a challenge in communicating how the technology can provide benefits and what they have done to avoid the consumer from taking risks.

Based on our experience in developing solutions for both warehouse workers, architects and for medical purposes, this is not only valid for the consumer market but can also be seen in enterprise. There might be less focus on the social image of the user and more importance in the functionalities of the glasses. But in our belief, when you are provided with good software, functionality transforms into enjoyment when using a product that fulfills your purposes.

In the end, all smart glass users are humans, striving for the same functionality - to support their everyday life in different aspects.

In a win-win manner, the technology itself has some way to go before being fully introduced to consumers and also have some time before their customers will feel completely ready to use smart glasses in their daily lives (Basoglu, Ok & Daim, 2017). Alas, there might still be some time before we see smart glasses being adopted by the general consumer walking down the street.

Conclusively, consumers generally hold a positive attitude towards smart glasses and find them both useful and easy to use (Basoglu, Ok & Daim, 2017) and there will always be different types of personalities, acting differently towards new and (by some perceived) risky technology. As with other innovative and new technological solutions, early adopters open to new experiences and interested in acquiring smart glasses for its functional level will be the first ones to enter the market of consumer smart glasses (Rauschnabel, Brem, & Ivens, 2015).

Rauschnabel, P. A., Brem, A., & Ivens, B. S. (2015). Who will buy smart glasses? Empirical results of two pre-market-entry studies on the role of personality in individual awareness and intended adoption of Google Glass wearables. Computers in Human Behavior, 49, 635-647.